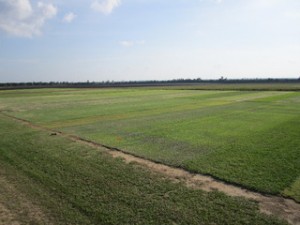 Much of the US experiences periodic drought from time to time.  Even though rainfall is generally abundant in Florida, its occurrence is seasonal with 70% of the annual rainfall amount occurring from May to October.   Couple this with increased population growth and greater demand for potable water resources, landscapes and other turfed sites typically lose out when outdoor water use is curtailed.  Residential water use comprises 61% of the public supply category and is the largest single portion (43%) of groundwater withdrawal in Florida.   The use of water for landscape and turfgrass sustenance is a hot topic and many parts of Florida experience restrictions on outside water uses. On top of water restrictions, ordinances which restrict turfgrass use (species selection and square footage limits) are being drafted.  Many of these restrictions are only based on casual information, not necessarily science.   Grasses undergo many changes in response to drought and some of these responses are not easily noticed.  However, they have a profound effect on the plant’s ability to withstand drought.  Some of these changes can be very difficult to quantify in the laboratory.  Other changes are readily observed and easily quantified.  With this in mind, we are addressing drought tolerance of turfgrass from several angles.

One way to study the effects of drought on turfgrass is by using a Linear Gradient Irrigation System (LGIS).  At the onset of construction, 12” of topsoil was removed and stockpiled using heavy equipment.  The subgrade was shaped and laser-leveled to provide a 5″ drop from the outside edges inward to ensure that all surface water flows to the center.  After the subgrade was established, the topsoil was replaced, and the final grade was established using laser-guided implements.

The LGIS has a triple row irrigation system with the central line having an irrigation head spacing equal to 33% of the throw of the irrigation heads.  This spacing allows for considerable overlapping from head to head and ensures uniform distribution of water perpendicular to the irrigation line.  The outside rows of irrigation heads are triangulated to the central head of the center trench and were used only during the establishment period to ensure uniform plot establishment and when fertilizer treatments need to be watered in.Construction of the 3-acre LGIS began in 2008 and became operational spring 2009.  Today there are 26 commercially available grasses and 50 germplasm accessions being tested and monitored under drought conditions.

For more information on the LGIS:

Figuring out Fertilizer for the Home Lawn